Reframing the Goal of Exposure Therapy

Jane and her husband, Charlie, made a major move in their lives. The pandemic showed them they could earn a living from home, and their home could be anywhere they wanted. They decided to move from a condo in Chicago to a single-family home in the mountains of Colorado. They wanted to have a quieter, less frantic life.

Their new Colorado home perched on top of a mountain, giving them stunning views and serenity. But it also gave them isolation. A trip to the grocery store was just about an all-day affair, and neighbors were far and few between. Charlie thrived in his new environment, but Jane seemed agitated. She finally had a panic attack. Then another. And another.

Although Charlie loved the mountain top, he put their home on the market and they moved down to the town below. Jane stopped having panic attacks and their lives went on. Jane and Charlie thought she was “cured.” But when they ventured to higher heights for hikes or to visit friends, Jane’s anxiety kicked in. Her therapist suggested that with enough exposure to isolation in the mountains, Jane would learn she was okay. 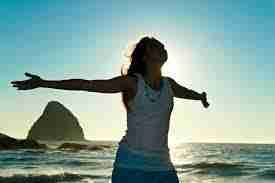 The idea was that the more she was in high isolation, the more she’d get used to it. But her anxiety remained great. She learned to ritualize by repeating to herself, “I’m going to be fine, I’m going to be fine.” This worked to reduce her anxiety, but she really couldn’t function, and she still felt threatened. She had just exchanged one ritual for another to mitigate her exposure to anxiety-producing situations.

From Fear Reduction to Tolerating Distress

Encouraging Jane to face her fears is widely accepted as good practice for treating anxiety disorders. But for Jane, it really didn’t work very well. Moving to town certainly improved her well-being, but that only obscured the fact that she still had severe anxiety in certain circumstances.

In fact, getting used to isolation—habituation—can be a great experience. But in Jane’s case, it wasn’t enough. When she adjusted her focus from “curing” herself of anxiety to understanding that anxiety is a part of life, she had an epiphany. She learned she could live her life to the fullest despite her anxiety—she didn’t have to be perfect all the time. She could tolerate a certain amount of distress in her life, which helped her strengthen her ability to adapt to anxious situations.

Jane learned to live with some anxiety when it appeared, rather than trying to eradicate it totally. She learned to deal with her emotions instead of trying to make them vanish. In this way, she reframed her own view of anxiety. Her distress was no longer a problem, it was something that surfaced from time to time, and something she could handle.