How to Kill a Relationship: Criticism 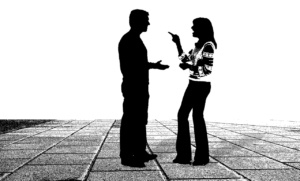 Joking but Not Really

“Jared would rather get a root canal than carry his socks a foot further to the hamper,” said Jared’s wife, Cynthia, at a party. Ha, ha, pretty funny. Jared’s wife is pretending to be funny and playful when she’s really being passive aggressive. And super critical. In one sentence she’s saying he’s lazy AND he’s a slob. She’s doing it under the cover of humor because she’s a coward to talk to him honestly and directly. And worst of all, she’s talking to friends about him in front of his face. So, Jared feels humiliated, embarrassed, and hurt, and unlikely to pick up his socks anytime soon.

When Cynthia says, “I always have to pick up after Jared,” she really means that she has to pick up after him more often than she’d like. But she uses words like “always,” “constantly,” or “never,” to express how frustrated she is that Jared’s messy. She’s exaggerating to make a point. But when Jared hears this, he hears that he is so flawed and wrong that he’s a worthless person. And instead of picking up his socks, he takes a defensive posture, possibly fighting back with a countercriticism for Cynthia.

Criticizing Without Saying a Word

The classic example of this is to reload the dishwasher in front of your partner so he can see you rearranging the plates in the “right” way. In Cynthia’s case, she walks over to the socks, picks them up with a sign, drops them dramatically into the hamper, and rolls her eyes. This will only serve to irritate Jared, and may even make him dig in his heels, vowing to never pick up his socks again.

Cynthia uses the word “should” a lot when talking to Jared. As in, “You should be more respectful of me, when all I ask is a tidy house.” Or, “You should know it makes me crazy that you can’t put your socks in the hamper.” Or worst of all, “You shouldn’t be such a lazy slob.” When Cynthia uses the words “should” and “shouldn’t,” she is shaming Jared, but she’s not getting the desired effect, which is to get Jared to pick up his clothes. All it really does it make Jared feel there’s something wrong with him because Cynthia knows everything and he, apparently, knows nothing.

If Cynthia could shift her perspective from what she doesn’t like about Jared to what she is feeling herself, she’ll be much more successful. She needs to communicate with Jared from a position of vulnerability instead of a position of superiority. She can do that by saying how frustrated she feels and how she needs Jared to help her keep the house tidy. When Cynthia talks to Jared as a partner and not an adversary, she gets a better response because Jared is not put on the defensive. That’s when he’s most liable to hear Cynthia’s concern.