How Shame and Codependency Can Shape Your Life

When Ryan was growing up, he felt somehow emotionally disconnected from his parents. One time, after a routine, but still hurtful, bullying episode on the playground, Ryan came home wanting sympathy. Instead, he was told not to whine and “You’re a big boy now.” Another time he was told, “Boys don’t cry.” And even worse, “I’ll give you something to cry about.” Ryan was made to feel shame for his legitimate feelings. In fact, all through his childhood, he was emotionally abandoned.

So, what happens to Ryan as he grows up? He feels like he’s wrong for feeling the way he feels. He feels empty inside. He feels disconnected from his parents. He feels shame. Shame makes him wonder what others think about him. What’s wrong with him? Which causes low self-esteem and anxiety. Often that anxiety is a catalyst for addiction or eating disorders.

Ryan’s parents’ emotions did not match Ryan’s, so he was thwarted from building his own individual self, and thus, he developed codependency. Shame and codependency often go hand and hand. With Ryan, he had was critical of himself, because that is what he had been taught since childhood—that he was never good enough. 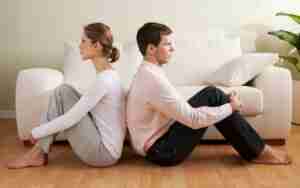 That means Ryan had to find who his true self was before he was made to feel shame. He had to get to the root of his problem to discover what caused it and why. Once he understood its origins, he had to confront the idea of how shame and codependency shaped his actions and indeed, his life. He had to challenge the false narrative he had adhered to his entire life. Only then could he begin to build his self-esteem and work on loving himself as he deserved to be loved.

Ryan was able to get to the root of the problem with the help of a qualified therapist who guided him on the road to recovery. Ryan learned to speak up to his partner and became more assertive in the face of verbal abuse. With persistence and patience, he set boundaries until his partner’s abuse waned and the dynamic of their relationship changed. Because he finally stood up for himself, his partner began to look at Ryan in a new light. She began to respect him for holding firm and for respecting himself enough to demand to be treated well. They were able to become more intimate and together, they forged a healthier relationship.