Jessica and Robert were madly in love when they got married. They thought, like everyone else, that their marriage would beat the odds. They weren’t the ones who would get a divorce. But everyone comes into a marriage with a certain amount of baggage, expectations and behaviors that can damage a relationship. And sometimes these can lead you to a place where you’d benefit from counseling. 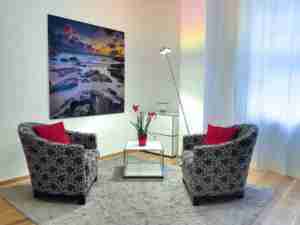 You need couples therapy when:

You’re afraid to discuss important issues. Jessica, for example, hated confrontation. So she would never bring up issues that were just too touchy for her. Instead of having an open discussion about money, sex or even his irritating habit of dropping dirty clothes on the floor, she stayed mum. She would only talk about cheerful, noncontroversial things. She was afraid she’d make Robert mad.

Your tone and substance are always negative. Robert, on the other hand, didn’t mind talking about unpleasant things at all. In fact, that’s all he talked about. He put Jessica down at home and in front of others, leaving her feeling shamed and disrespected. His tone was often angry even if his words weren’t. He didn’t realize he was so negative. It affected Jessica in such a way that she felt insecure and wanted to shrink away from Robert.

You use lack of affection as punishment. Jessica would withdraw after a disagreeable episode, but she took it to extremes. She would use the silent treatment as punishment and take that treatment into the bedroom where there was no touching allowed. She, in effect, became the ‘parent’—the person who meted out punishment in their relationship, thus causing an imbalance.

You’re in competition with your partner. Robert began to see Jessica as an adversary—someone he had to one-up. He was naturally competitive and he felt that Jessica was not on his team; therefore he had to win against her. No matter the issue, Robert began to take the opposite stance, sometimes in disregard to what he actually thought, just to beat her at the game. Soon enough they were not facing the world together, as a unified, loving team, but as battling antagonists.

You’re unfaithful financially or romantically. Jessica began to daydream about having an affair with someone who brought her roses and treated her like Robert used to at the beginning of their relationship. Robert, on the other hand, felt justified in keeping his raise to himself and spending it on whatever he felt like. He could get back at her with the power he had—money. He kept their financial information to himself, which made him feel more in control.

If your relationship shows any one of these signs, a therapist can help you get back on track. Sometimes couples need a reboot. If you do, don’t wait to seek help. It’s always better to catch problems earlier than later.

Nancy Travers is an Orange County Counseling professional.  If you need safe, effective counseling services, please get in touch.  You can reach her here: https://nancyscounselingcorner.com/contact