Dating Deceptions That Are Really Disasters

You can save yourself all kinds of pain and suffering when you learn to recognize the warning signs your date is giving you. A friend once told me, “Never date someone with more problems than you.” A good idea, but when you’re dating, you tend to put your best foot forward to hide those problems. So does your date. Eventually, the truth will come out, and the truth is easier to spot when you’re looking for it. 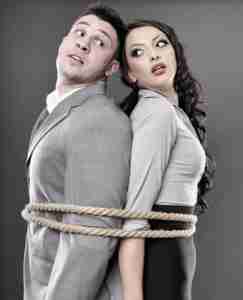 Here are some red flags to heed:

His Pants Are on Fire. What’s the most important thing in any relationship? Honesty. The cornerstone of trust upon which everything else is built. When you’re just starting to date and he’s still trying to impress, it’s easy to exaggerate a little. It’s a flaw that might be forgivable at first. After all, he is trying to get you to like him. But congenital liars will make your life miserable.

It’s sometimes hard to determine if your date is an honest guy because he’s lying and you would like to believe him. So you do. But if you’re paying attention, you’ll note discrepancies. When you meet his high school friend you discover he really wasn’t the quarterback, he was the equipment manager. Or he didn’t actually graduate from Wharton, he took a six-week course. When you find a pattern of deceit, it’s time to call him on it.

He’s a Leech. Somehow you always seem to end up at your place. At first this is charming. He can’t get enough of you. He wants to be with you and feels comfortable enough to just pop in. He’s at home enough to help himself to your fridge. How endearing. Until it’s not.

While it might be perfectly understandable to hang out more at your place than his (he’s got four roommates, your place is closer to work, etc.), if you’ve never set foot in his place, you should wonder why. Either he’s hiding something from you—his place is a dump—or he’s hiding you—doesn’t want you to meet his roommates. Ask to see his place. If you get push back, ask him why.

He’s Fiscally Irresponsible. At first, expensive dinners and fun getaway weekends at posh resorts are a real refreshing change from the usual boyfriend who finds it hard to part with a nickel. He might be trying to show off for you, which may seem adorable at first but really, it’s immature. Or he might not think things through and spend without realizing the consequences. He may thrive on instant gratification and the future be damned. Whatever the reason, it’s not good.

It’s especially upsetting when he promises something he can’t deliver. But he can justify, explain away and rationalize. Like when he wants to make extravagant travel plans, “We’d spend nearly as much if we stayed at home.” When he can’t afford to buy a suit to wear at the expensive dinners, there’s something wrong.

He’s So Interested in Everything You Do. And everywhere you go. And who your friends are. And how you spend your money. And what you say on social media. Yes, it’s nice that someone cares. And it’s great he takes such an interest in what you say and do. It’s probably a refreshing change from other boyfriends.

But when he crosses the line into the obsession department, then you have to wonder. He might have major jealousy issues that will escalate into anger when you see other people. He might be very insecure and punish you when you aren’t always available to him. If he tries to keep tabs on you all the time, if he texts you constantly to check up on you, you may have to call a halt to the relationship.