Crazy-Making: Are You a Victim of Gaslighting?

Gaslighting is a colorful name for insidious mental abuse. It is perpetrated on victims with the deliberate attempt to make them doubt their own concept of reality. In other words, crazy-making.

The term gets its name from the play, Gaslight, that was later made into a film starring Ingrid Bergman. Her character’s husband would make changes in their environment—including turning down the gaslight. When she noticed the changes, he insisted she was misremembering or downright wrong. He continued to systematically alter her reality and then deny he did it. Eventually, over time, she began to mistrust herself and in fact, think she was crazy.

Gaslighting is a subtle power 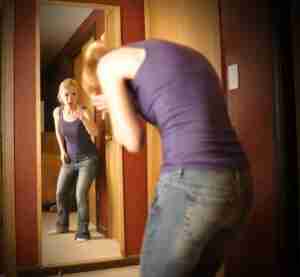 A Young Woman Is Depressed Looking In A Mirror While The Reflection Is Yelling An Pointing At Her Self In Anger.

play by a partner,boss,sibling or parent to whom it is of the utmost importance to have total and complete control over you. It can cause the most confident, intelligent, successful person to become an emotional wreck. Your self-esteem erodes to the point where you are really unsure if you are right or wrong and you think your own judgment may be impaired. The gaslighter—the perpetrator of these subtle attacks—has you where he wants you. He has eroded your confidence to the point where you allow him to define your reality. You have abdicated your power to him.

The crucial point in this relationship is when you become so beaten down that you are beyond recognizing that you could possibly be the sane one—that he is the one who is abusive. He has taken you over, and you are no longer the strong person you once were. You are depressed.

Signs You Are Being Gaslighted

What to Do If You Are Being Gaslighted

The good news is, you can turn this relationship around, especially if you avail yourself of therapy. You have to remember that the gaslighter is an abuser who isn’t playing fair. There is no logic that you can use that will change him. You can only change how you respond to him. When he attacks you, don’t let it provoke you. Don’t engage. Identify the abuse for what it is. You may say something like, “If you continue this behavior I will leave the room.” And do it. Leave the house if necessary. Every single time. You be the relentless one now. And get help. If something feels wrong to you, even though you’re not sure how to explain it, then there probably is something wrong. A qualified counselor can help.

Nancy Travers is an Orange County Counseling professional. If you need safe, effective counseling services, please get in touch. You can reach her here: www.nancyscounselingcorner.com/contact-us.