Codependents and Narcissists: Two Sides of the Same Coin?

Often people who are codependent are the yin to the narcissist’s yang. In other words, a codependent and a narcissist are two integral parts of a whole. One cannot exist without the other.

Strange as it may seem, both codependents and narcissists have commonalities. Both have probably suffered some neglect or abuse in their childhoods that resulted in insecurity. But they both deal with it differently.

The codependent person is so insecure he needs to be needed to feel worthy. He needs to fill a role of usefulness to someone else. Sometimes this person becomes so self-sacrificing that his own needs are sublimated to his own detriment.

The codependent is overly concerned with the needs and desires of someone else so he becomes a passive and submissive individual. He doesn’t know how to disengage emotionally from someone who is his counter-match. He needs that domineering, bold, controlling person to make him feel worthy, even loved.

He makes the assumption that if he gives, gives, gives and sacrifices himself, he with be rewarded with loyalty and love. It is that desperate search to be loved that makes him a fixer and a people pleaser. But when he ends up with a narcissist, he is bound to find himself in a lopsided relationship where he ultimately feels used and abused. 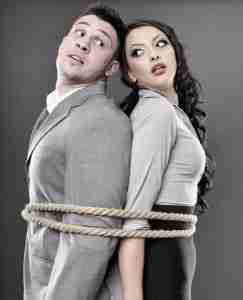 A narcissist may have suffered the same kind of childhood abuse or neglect as the codependent, but she deals with it differently. Her insecurity drives her to feel superior to others. She feels a need to prove her self-worth by controlling others who will feed her need to be important.

A narcissist has no empathy, so she doesn’t care about using others to make herself feel powerful and appreciated. She is so self-absorbed that everyone in her orbit is just another person she can feel she is above. Yet she is actually desperately in need of people to admire and support her—to feed her need, which has its origins in her insecurity.

She will do anything to maintain the myth that she is superior and therefore worthy of love and devotion. So she demands fealty and manipulates others to give her the special treatment she is convinced she deserves. She cannot tolerate criticism or rejection because her self-esteem is so fragile. She will do anything to avoid feeling defeat because it doesn’t fit her narrative of herself. So she takes from others and manipulates and controls them to do her bidding.

Next week we’ll talk about the dysfunctional compatibility of a codependent person and narcissist, and what to do about it if you’re in that situation.